Fruit video slots available at the online casinos clearly bring to mind the classic machines that were and still are, commonly found in pubs, bars, halls as well as in the lobbies of live casinos. But the old-fashioned games are completely revamped and enhanced in the modern online counterparts, which now come with stunning graphics, sounds, and animations together with usually 5 reels and tens of pay-lines, enticing game features, and bonus games for additional fun and engagement.

Novomatic, a multi-billion international gambling group of companies and a major player in the international gaming industry, invests huge capital in research and development every year with a keenness to do pioneer work, a strong capability to read and foresee sector’s changes and needs, and a total dedication to quality, accompanied by a strong sense of social responsibility, customer orientation, respectability and the power of setting technological trends. From all these factors there always emerge unique games that become immediately popular among players worldwide.

Online slots are clearly a core business for the group that developed several successful fruit-themed slots. Certainly, 4 of the most popular games in this category are Ultra Hot Deluxe Slot, Golden Sevens Slot, Clockwork Oranges Slot, and Happy Fruits Slot. 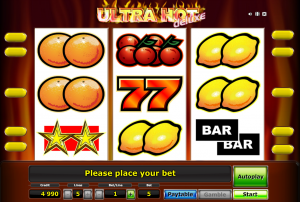 With its 3 reels and 5 pay-lines and symbols of plums, oranges, lemons, and cherries, Ultra Hot Deluxe has not many of the features you may expect from a modern video slot. For this very reason among the 4 games, this one is the most similar to the traditional old slot machine with all the wistful affection it can bring with it.

Two features though make you understand that this slot machine comes from a completely new world, the animation of the burning symbols after a winning combination and the “Gamble” feature, which gives you the opportunity to double your winnings.

If you match three symbols on one of the 5 pay-lines, you win. If you can fill all the screens with only one fruit symbol, all your winnings will be multiplied by 2. You can win up to 300,000 credits with the top winning combination of three Double-Seven symbols and with a maximum bet of 2,000 credits. 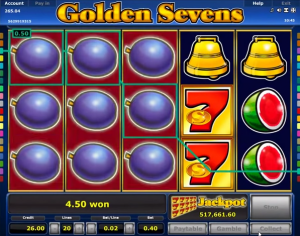 On a scale of modernity or rather closeness to the classic fruit machine, Golden Sevens would place at number 2. Golden Sevens is a video slot with five reels, twenty pay-lines, and a progressive jackpot, but without the Wild or Scatter symbols, or other succulent features and surprises. Fruits symbols include Lemons, Oranges, Cherries, Watermelons, Plums, and Apples, while other symbols include Sevens and Bells. The Seven symbols is the most valuable one. Match at least three symbols or two cherries on an active pay-line to win. 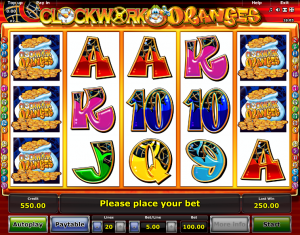 Developed by Empire Games Limited, a member of Novomatic Group, the Clockwork Oranges slot is a very colorful themed video slot with many original features. The game has 5 reels and 20 pay-lines, great graphics, special symbols, bonus games, and more. Here the fruit comes in the form of an orange-shaped character that is also an alarm clock and the scatter symbol in the game. 3 Orange symbols, appearing on reels 1, 3, and 5, trigger the Clockwork Oranges feature, in which a clock will decide how many hands will be used in the feature.

During the interesting bonus game, a quantity of hands is randomly selected – the higher the number of hands you get, the higher the chances of your potential winnings. In the game, the hands spin and stop indicating the various fruit images. The combination of fruits that is formed in this way and the multiplier with the bet dictate the amount of the final winning. If all the hands stop at the Orange Alarm, which is the scatter, the player gets into a super game that guarantees a super payout. 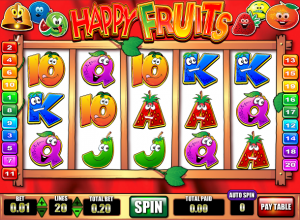 Developed by Mazooma Interactive Games, a member of the Novomatic group of companies, Happy Fruits slot is an online slot game that can be played on your PC as well as on the latest smartphones and other mobile devices. The game has 5 reels and 20 pay-lines with many lovely features, including exceptional bonus games, and hosts a happy family of funny cartoon fruit characters. The Strawberry Ace, the Green Applejack, the Queen of Plums, the King of Blueberries, and a Naughty Orange10 only want to bring you rich prizes.

The Super 7 Bonus game feature is triggered by three 7’s on the central reel. Watch the Super 7 jumping and dancing on the screen while asking to select a gold 7, a silver 7, or a bronze 7. Select one and watch coins dropping to know the value of the multiplier of your winnings, for a maximum win of x500 your bet.

The Crazy Streak Bonus feature is triggered by three, four, or five Key symbols anywhere on the screen. This is an accumulation game. Accumulate symbols on the middle line of the reels, until you accumulate 3 Killer Tomatoes, which ends the bonus game and awards the accrued winning, up to x500 your bet.

Look for and play all these games at your preferred online casino for a full-packed session of juicy entertainment!

If you want to play for real money, nothing is better than a big signup bonus or welcome package to start! Mighty Bonus lists great bonus offers only from reliable and trustworthy online casinos, bingo rooms, poker rooms.